A  Special WW1 Supplement Edition of the Iron Duke has been published, for online distribution only, by Tim Nicholson.

Below is Tims introduction to the Journal, which is available for free download here:- The Iron Duke, The Great War, Centenary Articles. 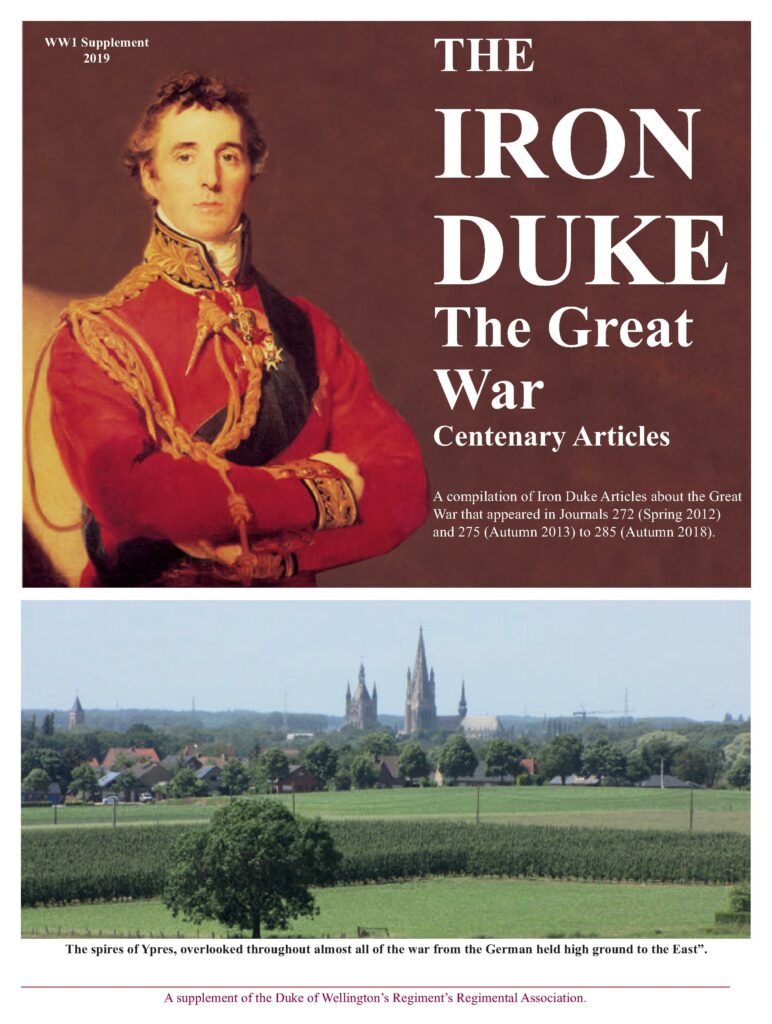 As Editor of the Iron Duke from 2006 to 2018 I took the opportunity to walk in the footsteps of our predecessors in this Regiment. We have had a number of names over our 300 plus years but for all of us the one that we recognise instantly is simple – the Dukes. So, I have been to many places where the Dukes, whatever they were called at the time, served King and Country in war: with Marlborough in the Venlo, Huy, Liege and Maastricht sieges along the Meuse in the War of Spanish Succession; with King George II at Dettingen and with his son at Fontenoy in the War of Austrian Succession: with Wellington at Quatre Bras and Waterloo; and a good number of smaller, or anyway less well known, engagements, many of them in and around the “cockpit of Europe” as Belgium and the adjoining parts of northern France was once called; and in Normandy under Montgomery and on the advance to the Rhine. English soldiers have made war here for the best part of 900 years.

As I travelled I often felt a kinship with the men who had gone before, who were, after all, soldiers like us, doing what was asked of them at the time to the best of their ability. But never more so than when I was on the battlefields of Ypres and the Somme and the other places where Dukes’ soldiers fought on the Western Front, and where many died, between 1914 and 1918. To stand on the home bank of the canal just a mile or two north of Mons and feel vicariously the mixture of excitement and dread that our Second Battalion machine gun team on one of the bridges must have experienced – they are coming, they are coming. How many? Are they any good? Will I be up to the task? Will I survive?

Or maybe sitting on Hill 60 shortly after the vicious and costly assaults that won us that unlovely and unnatural feature, and just get that first sniff of the chlorine gas that was to wipe out the forward companies, not knowing in that instant what it was nor what it’s terrible effect would be. Or maybe on the start line on 1 July 1916, full of confidence having seen, or anyway heard, the mines go off under, and the thunder of the barrage on, the enemy positions that must surely have crushed any resistance before our boys began to move. No-one could have survived that, could they? It’ll be a walkover, won’t it?

And sometimes I would just sit on the wall of a CWGC cemetery next to the headstone of a Dukes soldier on the end of his row and find myself chatting to him, telling him how it all turned out and little things that I thought he would find of interest about the lives of modern Dukes. Then maybe a light touch on the stone and a brief word of farewell, and on to the next place on the schedule. Silly really, I suppose but it seemed so natural at the time.

We have brought together the articles that appeared in the Iron Duke between 2014 and 2018, on the centenary of the great and small events that our men were engaged in. It is not easy to keep the thread of a story with a six month gap between serials, so now the reader can go right through from 23 August 1914 to 11 November 1918, read on the website or download to keep and read at leisure. It is a story of our Regiment – success and failure, gallantry and confusion, initiative and loss of opportunity, life and death. So many young lives lost, yet here and there through the horrors of total war between nations that have never for long been able to live alongside each other without resort to violent force, acts of amazing courage and leadership at many levels.

I write this introduction three days before Remembrance Sunday, when we remember the sacrifice of our men and women from 1914 to the present day. We will remember them. 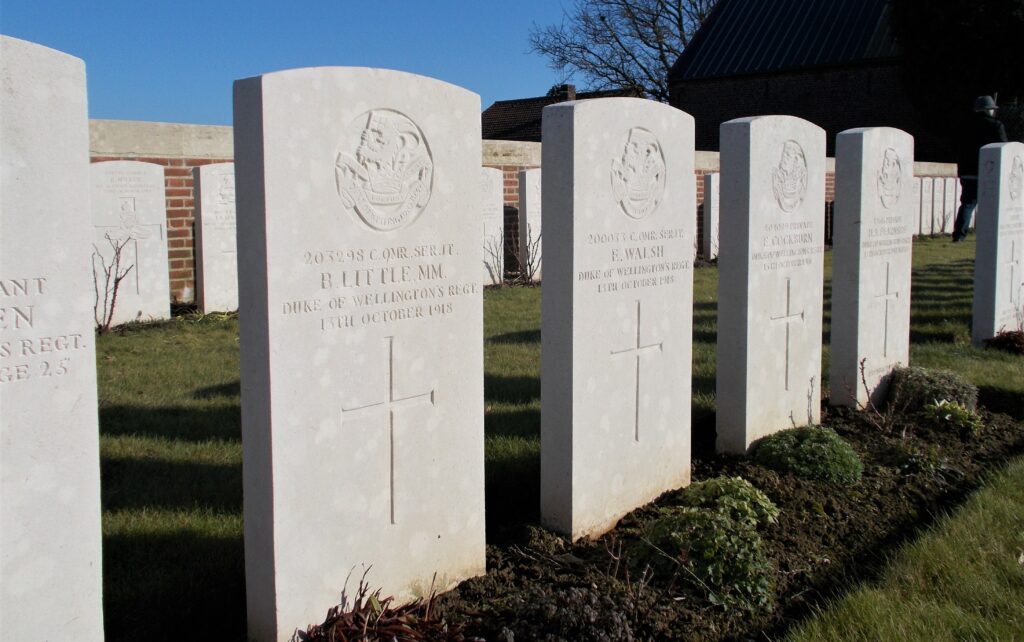 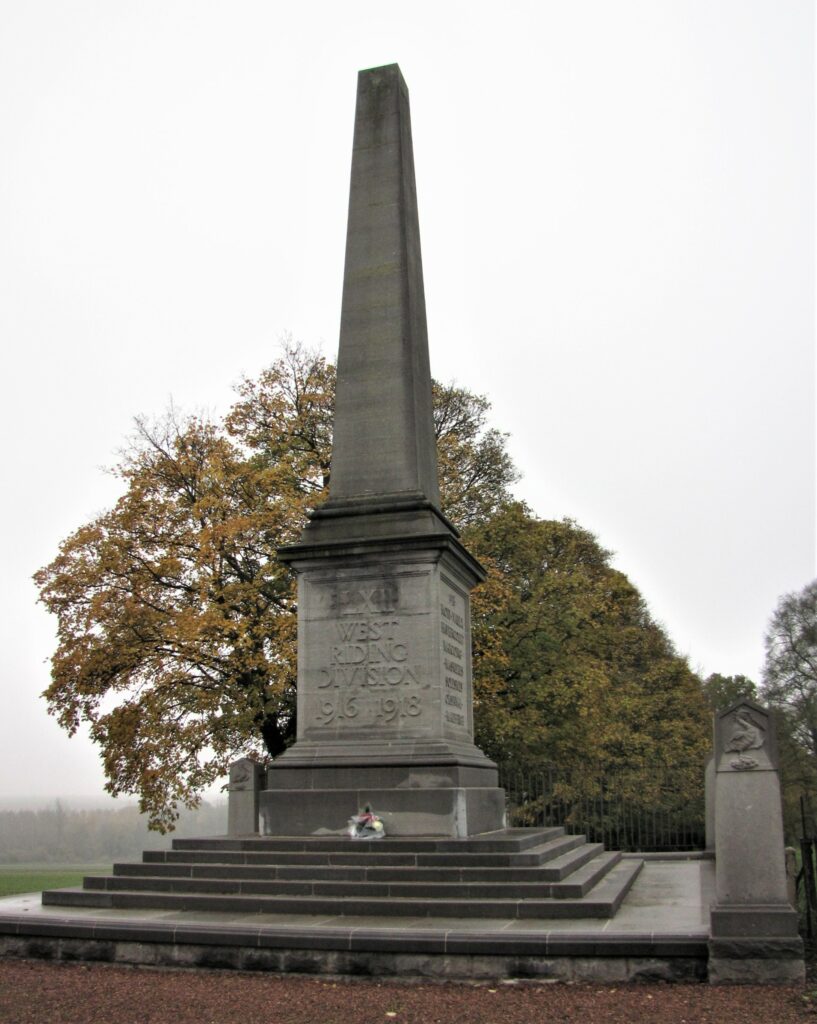