The whole nation has been inspired by the fundraising walk undertaken by Captain Tom Moore; who served in The ‘Dukes’ during WWII. Tom continues to proudly wear the Duke of Wellington’s Regiment (West Riding) Regimental tie and sport the Regimental Cap Badge on his blazer.

Tom was born in April 1920 and raised in Keighley, Yorkshire. He attended Keighley Grammar School and later went on to complete an apprenticeship, as a Civil Engineer.

Tom enlisted, as a Private soldier, at the beginning of the war, into the 8th Battalion (8DWR), stationed at Weston Park, in Otley, which was converted to armour as 145 RAC, though it retained its DWR title.

In 1941 Tom was selected for Officer Training and reported to 167 Officer Candidate Training Unit (OCTU), in Droitwich, Cheshire, on 7th Mar 1941. After completing the course Tom was commissioned, as a Second Lieutenant (2Lt),  into the 9th Battalion DWR (146 RAC), which was posted to India on 25th of October of that year. Tom was later promoted to Lieutenant (Lt), then again to Captain. On 12th November, 1944 the Battalion was moved to Chittagong, the Waybin, close to the Burmese border on the Arakan and held in reserve, due to Valentines not being used in front line duties. On the 18th of January, 1945 the Battalions ‘A’ Squadron was detached to support 71 Brigade in the amphibious assault on Rammree Island, in February. in May the Battalion moved back to the school of Armour, Ahmednagar, in India. In late August ‘A’ Squadron was again detached from the Battalion, for a tour of duty with the 4th Indian Infantry Brigade, 26th Indian Infantry Division, for security duties in Sumatra.

During his service with the 9th Battalion Capt Tom remained a member of the Battalion HQ. He was variously employed as the Battalion instructor of the motorcycle despatch riders, Intelligence Officer, Photographic Officer and Infantry Liaison Officer. Tom was responsible for the technical and mechanical training of the Battalions soldiers and officers, generally on Valentine tanks. Tom returned to the U.K., in early February 1945, to take a training course on the inner workings of the Churchill tanks, learning to become an instructor. Although the Battalion was earmarked to be equipped with Churchill’s later in 1945, the Battalion was instead converted to using armoured cars.  Capt Tom did not return to the Battalion; remaining at Bovington, as an instructor and the Technical Adjutant, at the Armoured Fighting Vehicle School, until he was demobilised in early 1946.

After leaving the Army Tom had a successful career as a Civil Engineer. Throughout he never lost his loyalty to the ‘Dukes’ and he joined General Sir Evelyn Webb-Carter and other Veterans on his last Regimental Association Battlefield Tour, to Italy, during which he made the steep climb to the top of Monte Cece, at the age of 91!

Perhaps most notably, from a ‘Dukes’ perspective, is that he personally organised, for 65 years, without a single break, the annual 9DWR reunion in Leeds. This in itself must be a unique record – so Tom has form!

Tom’s tale is one full of twists, turns and includes within it some of the monumental moments in our shared British history, so it is completely understandable why he hasn’t wanted to just sit still and do nothing during our current epidemic. So, by way of a thank-you for the excellent care he received from the NHS when he fell and broke his hip last year, Tom set about raising funds for the NHS pledging  to walk 100 lengths of his 25-metre garden before his100th birthday; donating 100% of all funds raised to ‘NHS Charities Together.’ The aim then was to raise £1,000 pounds

The ‘NHS Charities Together’ represents, supports and champions the work of all the NHS’s official charities. It also provides the National voice for NHS charities, champions key projects and themes that best enhance patient care and experience, and the impact NHS charity funds make.NHS charities give £1million a day to the NHS, providing vital funds to help the NHS do more and be better equipped.

The Regimental Association secretley worked, together with Tom’s family, to mark Tom’s 100th birthday in a suitable and unique manner to reflect his long commitment to the Regiment. The article about that is shown here:- Tom Moores Pre-birthday Celebration

At the time of writing this News Release; Tom’s Just Giving page fund raising had passed the £30 million mark, when you include the gift aid amount.

Various Newspapers have written about Tom, such as this article in the Telegraph:- Tom Moores ‘Just Giving Page’  and this one, by the BBC:- Captain Tom Moore: How the War Veteran captured our hearts  With many people creating drawings and other artwork depicting him.

Unfortunately one nameless newspaper had him down as a WWI officer, which would have had Tom aged around 126. 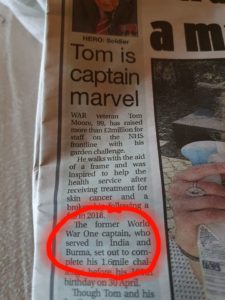 Other Artwork and poetry includes:

There is also this video, by Adam Salisbury.

The Chief of the General Staff conferred on Tom a Ceremonial Appointment as Honorary Colonel of the Army Foundation College, in Harrogate.  At the same time a Duplicate War Defence Medal was presented to Tom, which a member of the Medal Office had noticed was missing from Tom’s Medal bar. After Checking his records it was noted that the medal had been sent to him at the end of the war, but must have gone missing in the post; so somewhere out there, there is Tom’s original one.  Lt Col Miller, Commanding Officer of 1Yorks, also presented Tom with the Yorkshire Regiment Medal, on behalf of the whole Regiment for his outstanding achievement.

Some people have been calling for the Just Giving website to waive all fees, so 100% of contributions go to charity.

However Just giving does incur fees that they have to pass on for card processing by the banks, staff wages and website fees for hosting the website and email facilities, which is explained more in this website link:-
https://www.thatsnonsense.com/does-just-giving-charge-admin-costs-of-tom-moores-fundraising-donations-fact-check/