“It is somewhat singular that the first regiment which singularly distinguished itself in the first Peninsula War was the 33rd, which covered itself with honour at the storm of Valenza (1705).” – “History of the British Army” by Hon J. W. Fortescue

Between 1689 and 1815 the British were only rarely ‘not at war’ with the French – and built the British Empire in the process.
The second of these wars, starting in 1702, was about who should succeed to the vacant throne of Spain. The British Army had to be rapidly expanded and this resulted in the raising of the 33rd Foot Regiment, among others. Britain’s principal allies at the time were Holland and Portugal, and the Regiment was to see service in both these countries. In a matter of months of being raised the Regiment joined Marlborough’s army in Holland, but after two campaigns it was despatched, with five other of Marlborough’s best regiments, to open up a new front in Portugal. For the next six years the Regiment was continually in action.There were victories; particularly at Valenza (1705) and Saragossa (1710) and also defeats. In 1707 the 33rd was part of an allied force cut to pieces at Almanza. But, quickly re-raised, it fought with distinction until it had to surrender at Brigheura (1710), as part of the army’s rearguard overwhelmed by a Franco/Spanish army ten times larger.

In the meantime, the Duke of Marlborough was winning his resounding victories at Blenheim, Ramilles, Oudenarde and Malplaquet, which so overshadowed events in Spain and Portugal that little is now remembered of them, though the army there had to suffer far worse conditions than applied in Holland, due to poor quarters, lack of transport and a general shortage of essential supplies. Not for the last time in the history of the British Army casualties in action were trivial compared to those due to privation and disease.

To add insult to injury the regiments serving with Marlborough were granted the Battle Honours associated with his victories, while the 33rd and the other regiments which had served in Spain and Portugal received nothing: it was not the custom to award Battle Honours for unsuccessful campaigns! The 33rd, the only regiment to serve throughout the campaign might have expected, by modern standards, to be awarded the honour ‘Spain and Portugal 1704-10’, at the very least.

At Roucoux (in Flanders) the 33rd Regiment petitioned to attack the enemy and “did it with so good a countenance that they got a great reputation.” – The London Gazette Extraordinary 1746

From 1714 to 1742 there was a pause in the hostilities between Britain and France, due to the latter being too handicapped by internal corruption to present much of a problem.

However, in the latter year war broke out again with France, this time about who should succeed to the vacant throne of Austria. The 33rd Regiment was part of the army which was sent to Germany to join its Dutch and Austrian allies. There, near Frankfurt in 1743, was fought the Battle of Dettingen in which the 33rd particularly distinguished itself. This resulted in a defeat for the French and the award of the Battle Honour ‘Dettingen’ to the Regiment, its first. 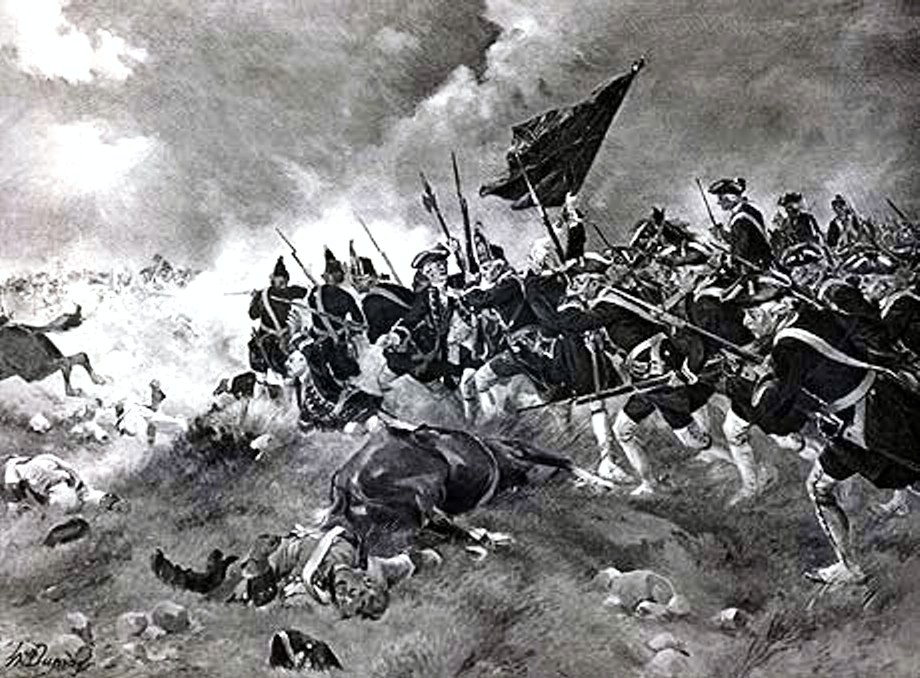 Dettingen was followed in 1745 by the Battle of Fontenoy, where the British infantry, under heavy fire, marched up to within pistol shot of the enemy and received their volley before firing a shot. The British volley devastated the enemy. As an example of the prowess of the British infantry Fontenoy stands almost without parallel. Unfortunately the rest of the allied army failed in its tasks so that the British had to withdraw while in sight of success. After Fontenoy the 33rd returned to England for a brief period to help deal with the rebellion led by ‘Bonnie Prince Charlie’. In 1746 the Regiment was back in Flanders taking part in battles at Roucoux and Lauffeld (1747). At this time it was nicknamed ‘Johnson’s Jolly Dogs’ after the name of its Colonel. 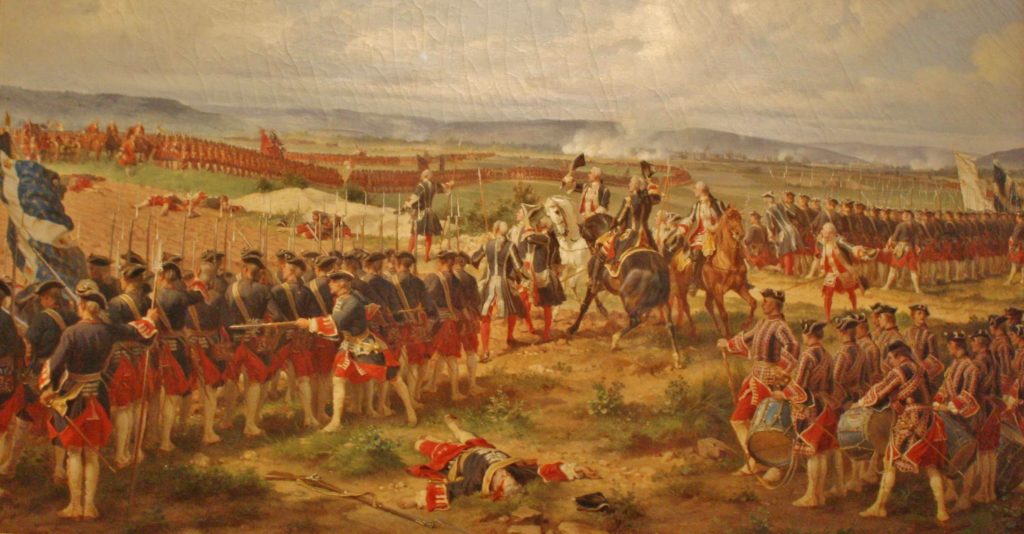 Peace was signed in 1748 but events outside Europe, particularly in India and North America, were hardly affected. The peace, in short, was little more than a truce while the struggle for colonial advantage continued overseas.

The shadowy borderland between nominal peace and open war was crossed in 1756 when the French took Minorca from the British for the loss of which Admiral Byng was tried by Court Martial and sentenced to death.  The plan of the British Government, led by William Pill, was to use British sea-power to wrest from the French their possessions in North America, India, Africa, the West Indies and elsewhere, while sustaining a war in Europe so as to prevent the French from sending reinforcements overseas. 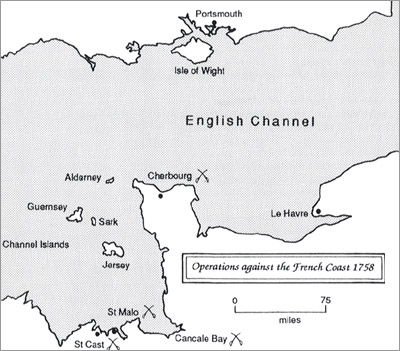 The 33rd, after taking part in two operations against the northern French coast in 1758, was assigned to Germany, arriving in 1760 as part of the ‘Glorious Reinforcement’ to join the allied army of British, Hanoverian and Prussian troops, which had, under the command of Prince Ferdinand, already won a great victory at Minden in the previous year. For the next three years the army was constantly campaigning, but few of these battles are now remembered. There was nothing which caught the interest of the public in the way that the capture of Quebec, or the victory at Plassey in India had done. As in Spain and Portugal the Regiment had to campaign under atrocious conditions and in the end had nothing to show for it.  In fact it was nearly 200 years before a proper history of the war in Germany came to be written. That war ended in 1763, by which time an empire had been won. To that empire had been added Canada, which joined Britain’s other North American colonies on the east coast of America.  This is where the 33rd was to see action next.

Ever since the end of the Seven Years War an undignified wrangle had been going on between the British Government and the American colonists, about how much the latter should pay towards the cost of that war.

War came in 1775, and the 33rd, under its young Colonel, Earl Cornwallis, was part of the reinforcement sent to America early in 1776. The Regiment was, at that time, said to be the best trained regiment in the British Army and as a result was known as “The Pattern”. On arrival in America the Regiment was brigaded with the Guards and subsequently took part in numerous battles both in the north, around New York and Philadelphia, and later in the south, in Georgia and the Carolinas. It was in North Carolina at Guildford Court House that it fought one of its toughest battles. 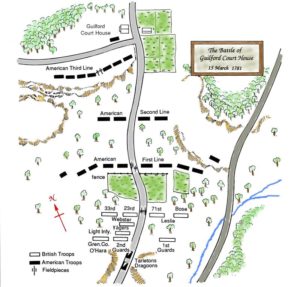 There, in 1781, a British force took on an American army twice as strong and defeated it. A famous historian (Fortescue) recorded “Never, perhaps has the British soldier been seen to greater advantage than in this obstinate and bloody battle”. Despite winning Cornwallis was obliged to withdraw to Yorktown where he was forced to surrender his army, which included the 33rd The Marquis Cornwallis KG. Col 33rd Regt 1766-1806.

The British troops marched out with the bands playing.  “The world turned upside down.” This was yet another campaign which, because it was unsuccessful, resulted in no Battle Honours for the regiments which had taken part.

In 1782 it was decided that all regiments would be formally linked with a county. The 33rd thus became:- 33rd (or 1st Yorkshire West Riding) Regiment, a title Cornwallis had particularly requested as, in his words, “… the 33rd Regiment of Infantry has always recruited in the West Riding and has a very-good interest, and the general good will of the people, in that part of the country”.  In 1786 the Regiment returned to England. It was from about this time the Regiment acquired the nickname of “The Havercake Lads”, the havercake being an oat pancake, a traditional staple in the north of England.