On the 10th of April 1918, elements of the 1st 4th Battalion (TA) The Duke of Wellington’s (West Riding) Regiment, were involved in a major counter attack against German forces, who had made a river crossing of the river Lys in the town of Erquinghem Lys, France. The German opposition was heavy and the Battalion suffered heavy losses, with 15 Officers and 391 other ranks killed, wounded or missing.

During the action Pte Arthur Poulter, from Leeds, performed an act of exceptional courage and bravery whilst under fire from German machine guns, during an artillery barrage.

Ten times he ventured out alone, as a stretcher bearer, and recovered fallen comrades, thus saving their lives. Later, after withdrawing over a river, he went back to the river crossing and, in full view of German troops, picked up another injured man and carried him, on his back, to safety. During the course of the day, whilst still under fire, he treated no less than forty men. He was eventually seriously wounded whilst attempting to rescue another injured soldier.

For this action 24066 Private Arthur Poulter was awarded the Victoria Cross.

The town of Erquinghem-Lys has always been proud of it’s links with Britain and it’s ‘Tommies’. Accordingly their Historical Society decided to erect and dedicate a memorial to Arthur Poulter. On The 14th of November, 1998, Arthur Poulter’s family descendants, plus a detachment of 45 men from the Duke of Wellington’s Regiment (West Riding), as escort to the Queens Colour, bearing the Battle Honour ‘Lys’, were on parade as the Town Mayor and Council unveiled the memorial. This was only the second time such a memorial to an individual soldier of the British Army had been dedicated by a town in France. The following year on the 11th of June, 1999, The family of Arthur Poulter donated his VC, and other medals, to the Regimental Museum, in Halifax, West Yorkshire. 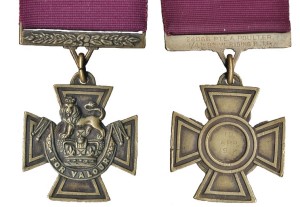 Over the years many Ex Dukes have visited Erquinghem Lys and maintained a friendship with the town’s residents. In 2002 the town contacted the Regiment, via regimental archivist Cyril Ford, with a request to award the Keys of the Town (Freedom) to the Regiment. This was accepted and planning was set in motion.

On the afternoon of the 12th of November 2005, in weather that was more akin to a seasonal Yorkshire day, The Colonel of The Regiment, Major General Sir Evelyn Webb-Carter, with two Guard detachments, the Regimental Colours and five Regimental Drummers formed up in front of the Town Hall, to accept the Key to the Town.

The presentation commenced, with the marching on to parade of the Regulation and Honorary Colours of the Regiment, led by Drummers. Who brought to a halt a number of rather surprised & unsuspecting motorists. The local Gendarmes were notably absent, on other duties. After asking the Mayor, M. Alain Bezirard, for permission to parade The Parade Commander Major Robinson, Officer Commanding Alma Company, invited the Mayor inspect the Troops, during which the Colonel of the Regiment pointed out the Battle Honour ‘LYS’ on the Queens Colour.

The Mayor then gave a short speech and presented a rather large Key to the Colonel of the Regiment. The Colonel then replied noting that, as far as it was known, this was the only occasion a French town had presented the Keys of their town to a British Army Regiment. The Colonel remarked that the Battle Honour ‘Lys’ was one of ten, out of a total of 72 that had been previously selected to be emblazoned on the Regulation Queens Colour and that the town of Lys would always be known in the history of the Regiment.  The Key is now on display in Bankfield Museum.