The British Army dates from the restoration of the Monarchy in 1661.  At that time the carrying of Colours was already an established practice, continued from the Civil War, and every company had its own Colour.  As there were from ten to twelve companies in a regiment, ten to twelve Colours were required. The Colours were all different but throughout a Regiment had a similar central theme, which was usually some private badge of the Colonel or part of his coat of arms. Colours continued thus until about 1700 when, owing to changes in infantry tactics, the number was reduced to two or three. At about the same time a small Union Flag was included in the first, or Colonel’s, Colour. In 1751 new regulations described the Colours to be carried in the future. The first, or King’s Colour, was to be a Union Flag with the Regiment’s number in the centre and the second, or Regimental Colour, was to be the colour of the Regiment’s facings, except for those regiments with red or white facings (such as the 33rd and 76th), whose Colour was to be a red St. George’s Cross on a white field. While the Colours carried today are basically the same as in 1751 there have been some important changes since that time, the principal ones being:

The substitution of the Regiment’s title, for the earlier Regimental number, in the centre of the Colours.

A considerable reduction in their size, which arose due to more accurate rifle fire making the Colours a more conspicuous target. At the battle of the Alma in 1854, for instance, five officers and ten sergeants of the 33rd were killed or wounded while with the Colours.

The last time the 33rd carried the Colours in action was during the Battle of Magdala, in April 1868.

The emblazoning of Battle Honours and other distinctions on the Colours was introduced from about 1800. Few Battle Honours were awarded before 1800. In 1844 a Royal Warrant decreed that the Kings crown be placed on the King’s Colour; at the same time they were redesignated as the Royal or Sovereign Colour.  Again, in 1892, a further Royal Warrant renamed them as the Queens Colour, though the crown on the colour remained the same as the original placed on it; i.e. a King or Queens crown.

The 76th Regiment had an honorary stand of Colours presented for its conspicuous service at the capture of Delhi and in the reduction of the fortress of Ally Ghur in 1803. No other British Regiment carries four colours. These Colours are also unique because they are the original size Colours which were carried into battle. They only bear the Battle Honours awarded to the 76th prior to the amalgamation of 1881.

In the past, Colours were the guiding and rallying point of the Regiment and their loss was considered a great disgrace. Today their use is ceremonial, symbolising the honour and sacrifice of a Regiment and all its members through the practice of showing Battle Honours.

Colours are also used to symbolise and reinforce the, almost mystical, connection between a Regiment and the monarch by reflecting in their design tangible evidence of the loyalty and duty owed by both to the other. It is these symbolic values which established the status of Colours as the most important possession held by a Regiment. 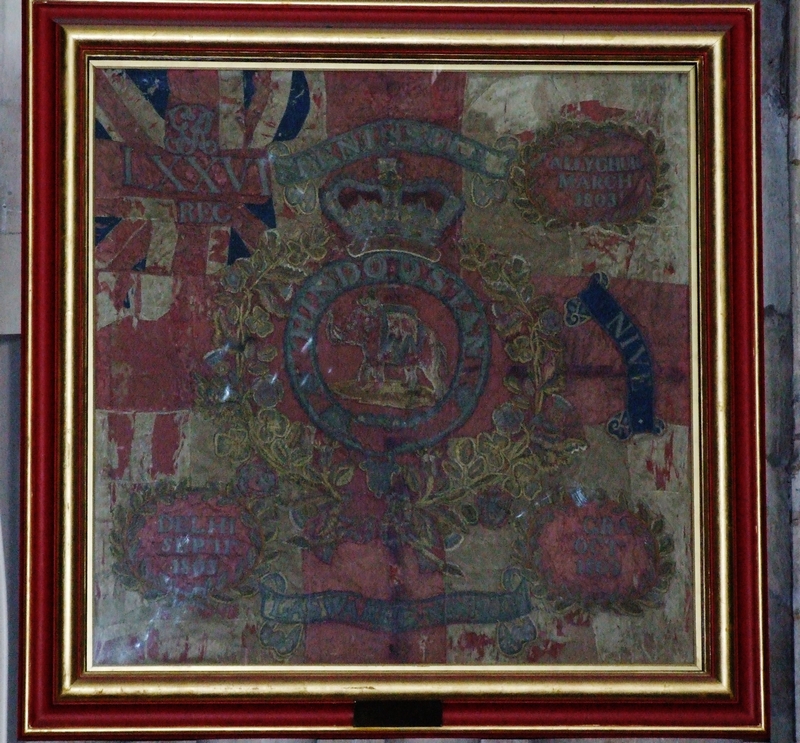 76th Foot Honorary Colour, presented in 1830, on display in the Regimental chapel at York Minster

The Final set of Regulation Colours were laid up in Halifax Minster on 31 March 2007.