The ‘Dukes’ were originally raised in 1702, when Colonel George Hastings, the 8th Earl of Huntingdon, was authorised to form a new regiment at the outbreak of the War of the Spanish Succession. As was the custom in those days the Regiment was named Huntingdon’s Regiment, after it’s Colonel. As Colonel succeeded Colonel, the Regiments’ name changed:-

In 1751 regiments were given numbers, in precedence of when they were originally raised, and the Regiment was from that time known as the 33rd of Foot. It soon established a reputation for excellence.

1782 – The Regiment’s title was changed to 33rd (or 1st Yorkshire West Riding) Regiment. This formalised the Regiment’s association with the West Riding of Yorkshire, at the request of Lord Cornwallis, the Colonel of the Regiment, in recognition of its long established practice of recruiting its soldiers from that part of the country,

In 1793 Arthur Wellesley, later to become the 1st Duke of Wellington, joined the 33rd and subsequently commanded it in the Netherlands and India until 1803. He succeeded as Colonel in 1806 and held this post until 1813. The 33rd later fought under his command at the Battle of Waterloo. The Duke of Wellington died in 1852.  The following year, on the 18th of June 1853, the first anniversary of the Battle of Waterloo following his death, the title of “The Duke of Wellington’s Regiment” was conferred on the 33rd Regiment, due to the Duke’s long and close personal connection with the Regiment.

The Regimental insignia incorporates the lion, from the Duke’s crest, and the mullet (5 pointed white star) which was placed upon the shoulder of the lion. The mullet had remained on the crest of Arthur Wellesley to denote he was the third son of the Earl of Mornington, it was not removed until both his elder brothers passed away, at which time he became the Earl of Mornington.

1873 (April) – The Depot of the Regiment was established, with the construction of a new barracks, in Halifax, West Yorkshire. The Barracks construction was completed in 1877 and on the 1st of September the Depot Companies of the 33rd and 76th Regiments marched in. Previous Regimental Depots had been located in:- Zevenbergen, Netherlands; Hull, England; Whilst the Regiment served in the West indies the depot was at various locations in ireland, including:- Birr Barracks, Mullingar, Armagh, Naas and Fernoy.

The original 76th Regiment of Foot was raised in November 1745 by Simon Harcourt, the 1st Earl Harcourt, for service in the Jacobite Rebellion, but was disbanded in 1746. It was re-raised in 1756, under the command of the 4th Earl of Granard, Lt Col George Forbes (Viscount Forbes). In 1761 the Regiment was despatched to Martinique, under the command of Lt Col William Rufane. Martinique, a French crown colony, was taken and Lt Col Rufane was appointed as the Governor. The Regiment remained there until the island was retaken by the French in 1763, at which time the Regiment was again disbanded.

1787 – 76th Regiment. The Regiment was finally re-raised for service in India, where it distinguised itself. For its services in India it was awarded an ‘Honorary’ stand of colours and the badge of an elephant, circumscribed by the word ‘Hindoostan’. 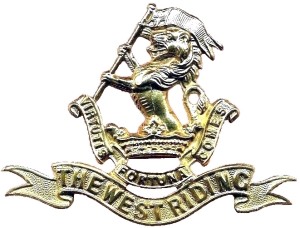 In 1881, under General Order 41/1881, issued on 1 May 1881, amended by G.O. 70/1881 dated 1 July, during the Childers reforms (continuation of the Cardwell reforms), the 76th was formally amalgamated with the 33rd Regiment of Foot, becoming the 2nd Battalion of The Duke of Wellington’s Regiment. Initially renamed as the Halifax Regiment the title was later changed on 30th June 1881, in a revised appendix to General order 41.

During the 1st World War twenty four Battalions were raised, fourteen of which were engaged on active service on the Western Front, in France, Italy and Gallipoli and a total of 72 Battle Honours were awarded. In the Second World War Battalions of the Regiment took part in the campaigns of Dunkirk, North West Europe, North Africa, Italy and Burma.

1948 (June) The 1st and 2nd Battalions, the two Regular Army battalions, were amalgamated into a single Battalion.